During my time in Brazil, I grew to love a food that has rapidly risen in popularity over the last several years called Pao de Queijo (Brazilian Cheese Bread).  Unlike regular American style cheesy breads that have the shredded cheese baked into the flour based dough, or baked onto the tops of rolls or biscuits, Brazilian Cheese bread is generally the size of a doughnut hole, has an outside crust, that holds in all of the soft almost gooey inside.

It’s not easy to explain the exact texture of Brazilian Cheese Bread, but in preparation of this recipe I really tried my best.  The closest I’ve been able to come to describing it would be how similar the outer crust and inner soft goodness of a German Pancake, or dutch baby.  The act of cooking creates a pleasant outer shell while the inside stays pliable and almost stringy.

We’ve focused mostly on appearance and texture until this point. but imagine a food where the more you eat the more you want.  It is a cheesy goodness that is as addicting as the texture.  In traditional methods only 1 or 2 cheeses are utilized to make this Cheese bread recipe, but as my wife and I continue to develop our Brazilian culinary art, we have experimented with using up to 5 cheeses in the recipe in our never ending quest to creating the Ultimate cheese Pao de Queijo. 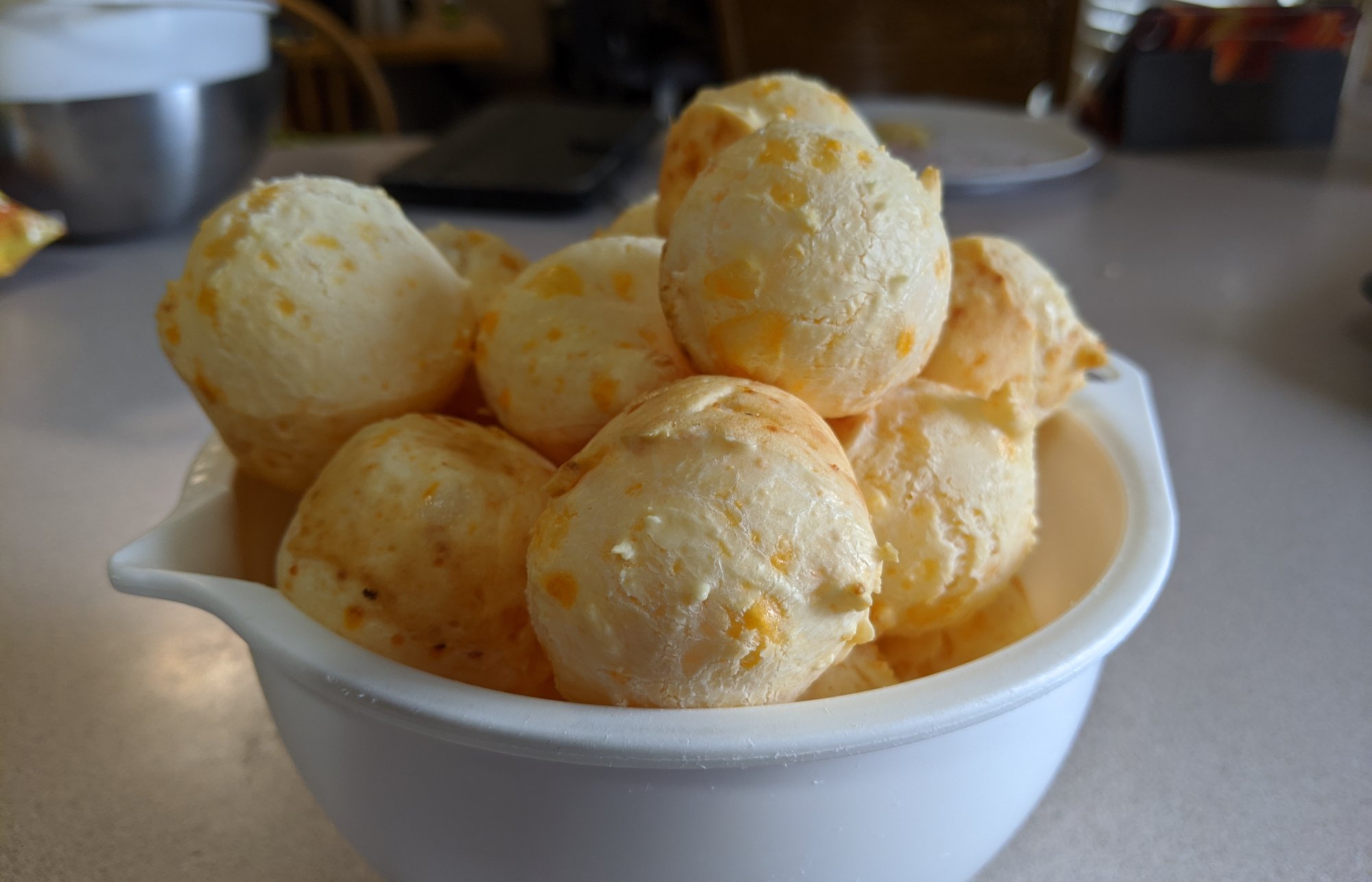 When I was living in Santa Caterina Brazil, in an area called Itaum,  We lived around the corner from a Padaria (Brazilian Bakery).  Every night as we would walk home we would deliberately walk by in front of this bakery and the owner would always run out out to get our attention.  We would always stop and oblige with a smile knowing what was coming next.

Rest assured within the next 2 minutes the baker would come out with a bag full of fresh Brazilian Pao de Queijo or Brazilian Cheese Bread.  My companion and I would spend the next several hours chowing down on the bags of Cheese bread.  Now, aside from the fact that we cultivated an amazing relationship with the baker why would he just give bags of cheese bread away every night?  Well, Pao de Queijo is intended to eat fresh because it doesn’t keep from day to day.

If you’ve never eaten a Brazilian Cheese Bread before, it is a traditional food that always seems to be found at Churrascarias (Brazilian Steakhouse).  Usually the size of a pinpong ball, this little bread has a slightly hard crust on the outside and a delicious chewy and cheesy inside.  I have a good friend from across the pond who once explained to me that it is similar to the texture of a Yorkshire pudding.

These little Cheesy treats are best eaten withing the first ten minutes of being baked.  However if they are eaten within the first three hours they are still good.  Then start getting hard and stale every hour after until they become too stale for consumption within 24 hours.  A the baker wouldn’t be able to sell them the next day so his options were to give them away to those who he knows without a doubt love them, or to throw them away.

Unlike traditional breads that infuse cheese into them, or rolls or bagels that sprinkle cheese on the top, Pao de Queijo is a bread that is completely infused with cheese.  When made without the optional Flour, they are gluten free, and Keto Friendly.  Some people have mixed emotions about whether or not Tapioca starch triggers an insulin response.  The best thing to do would be to try it and check your blood sugar.  I’ve been generally doing Keto for the past two years and they haven’t triggered any blood sugar spikes for me.

This is the same Pao de Queijo recipe I use for my catering company.

This is the exact same base recipe I use for my Catering Company.  So many times people will come up to me while we’re serving and ask for the recipe.  I simply smile and tell them to come see me after or to give me their phone number so I can pass it along.  Some people hold their personal recipes close to the chest or in some cases in a locked safe.

However this was the same recipe that I learned when I was in Brazil.  I learned if from a young baker named Renato.  Renato shared this exact recipe with us while having us make it with him.  I remember this experience distinctly because after he pulled the just boiled Water, Oil, and Milk from the stove he had me pour it slightly into the Tapioca starch while telling me to mix it up with my hands.

So as I was trying to touch the scalding hot liquid and starch that began to stick to my hands like tar, he would giggle and tell me I had Mãos Finas, or delicate hands.  I’ve since adapted to start using a wooden spoon, so I keep my hands a delicate as possible.

Brazilian Cheese Bread isn’t difficult it’s just a little different and traditional American cooking methods, However with a little patience and determination, you’ll for sure master this delicious delicacy.

We do not spam. You can unsubscribe anytime.